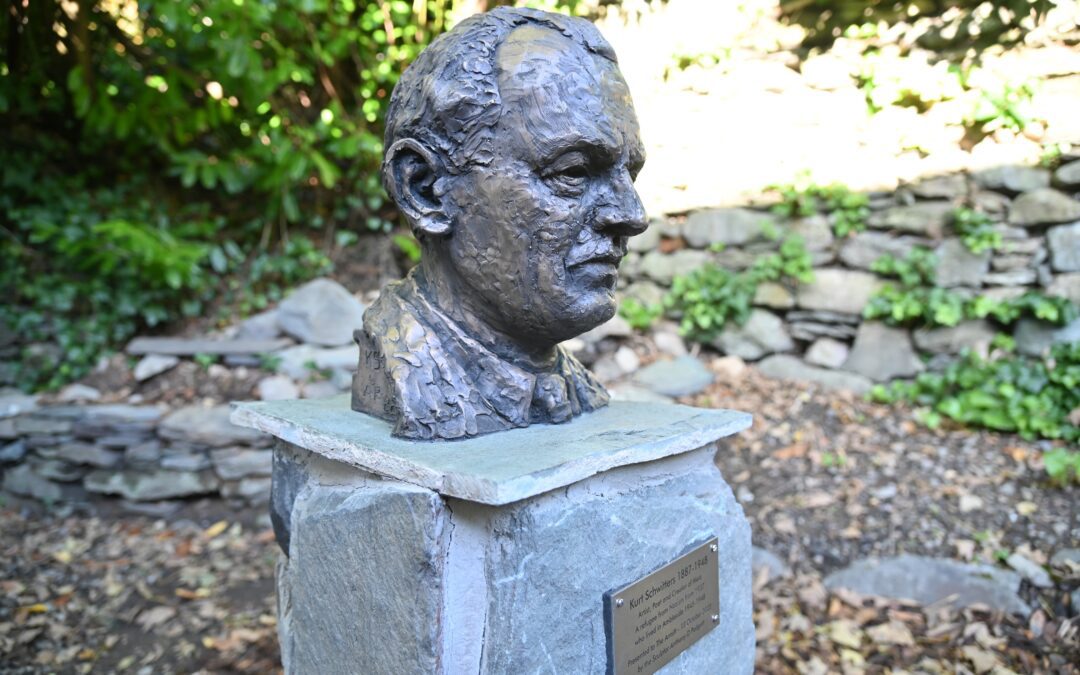 On Thursday 13th October, The Armitt unveiled a new bust of the artist Kurt Schwitters in the museum garden which is in mid-development. The bust, sculpted by artist Anthony Padgett, will be the focal point of the outdoor space to be enjoyed by visitors, staff, and volunteers alike.

Kurt Schwitters was born in Hanover, Germany, and became an accomplished artist within the Dada art movement. He fled Nazi Germany in 1937, spending time in various internment camps in Norway and the UK. He eventually settled in Cumbria for the last three years of his life, selling some of his artwork from the steps of Bridge House, Ambleside.

Anthony Padgett said: “Kurt Schwitters chose to live in Ambleside, made many friends and created many works here. He lived in 2 different houses and was buried in Ambleside. The town is a focal point for Schwitters, and it is an honour for me to have my bust of Schwitters sited in The Armitt. Here it is close to many of his original artworks and a library of books on his legacy. The bust of Schwitters is the first of a small number that will be sited in significant places around Europe.”

Faye Morrissey, The Armitt’s Manager and Curator, said: “It’s a great privilege to have this sculpture of Kurt Schwitters by Anthony Padgett sited at The Armitt. With the established collection of artworks and publications the museum already possesses, thanks to work from previous staff and trustee members, it seemed like an appropriate fit.

“We hope the sculpture here will become part of a wider Schwitters trail with other institutions both nationally and internationally. Also, as we had plans to develop our outside area into a place that visitors could access for peace and reflection, the discussion about a sculpture in the space came at just the right time and allows us to further acknowledge the Schwitters connection and legacy with Ambleside.”

So, how do we celebrate one of the most significant artists of the twentieth century and his impact on Ambleside? By making him part of the landscape, of course.

Visitors will be able to see the sculpture of Kurt Schwitters at The Armitt as part of their experience to the museum – open Wednesday-Sunday, 10am-5pm until the end of October, then Wednesday-Saturday, 10:30am-4:30pm during November and December.

Thank you - You have successfully subscribed